The prospect of going back to work on public transport – used in normal circumstances by most working people in AP, I believe – must be daunting  for many as we come out of lockdown, and not only for those who are in some respects vulnerable, or who have vulnerable relatives at home. With TfL limiting passenger numbers to 15% of the usual volume, how are all these people going to travel? And there'll be more parents joining the commuters in a couple of weeks time as primary schools re-open.

Reclaiming Crescent Road during the lockdown (see also video of partying at the bottom of this post): Driving would seem to be the safest option with regard to Covid-19 for those who own a car (so not an option for over half of Haringey residents). Cycling is another option – for the intrepid – but the lack of 'whole route' cycling infrastructure in Haringey, and the volume of traffic, are major deterrents to potential cyclists (count me among that number). Thus a massive shift to driving seems likely, resulting in traffic gridlock and more air pollution which, apart from other evils, helps spread C19. We need other means of safe travel, as well as trying not to lose the healthy streets that we have enjoyed for the past few weeks.

Photos of Crescent Road pre-lockdown: two lines of traffic confront each other, an altercation between drivers, motor vehicles claiming the pavement 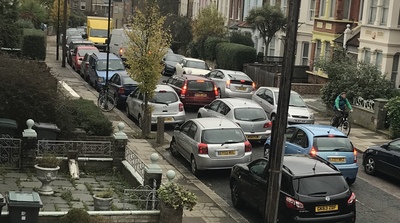 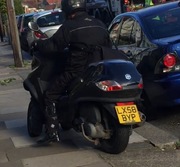 The Government and Mayor of London are only too aware of the dangers of increasing the rate of infection via public transport, as also of creating gridlock – witness the extraordinary announcement on May 9th by Grant Shapps that local authorities in areas with high levels of public transport use (Haringey is the third highest in the country) would be required to take measures to reallocate road space to people walking and cycling … as swiftly as possible, and in any event within weeks (statutory guidelines), and that some funding would be available. The Mayor also issued guidelines and promises of funding with his Streetspace scheme, and has been closing roads in the City. The proposed measures, apart from pavement-widening, focus on the introduction of temporary cycle lanes on main roads, and low traffic neighbourhoods (LTNs) in residential areas, to create both alternative means of transport, as well as street space for walking and exercising while maintaining physical distancing.

So what are LTNs? These block through-traffic by such measures as the use of Automatic Number Plate Recognition Cameras, which allow certain categories of motor vehicles through -  e.g. buses, emergency vehicles, Veolia trucks, disabled drivers, the milkman – and not others, including motorcycles. Residents' vehicles may be included amongst those that are exempt, but if they are not, they will sometimes have to drive a little bit further to get to their houses than in un-filtered roads. The ANPR camera on the street lamp in the picture (below) of a 'filtered' road (Orford) in Walthamstow will record the registration number of any vehicle which is forbidden from driving through, and fines will be collected by the local authority (unlike fines from speed cameras, which go to the police). 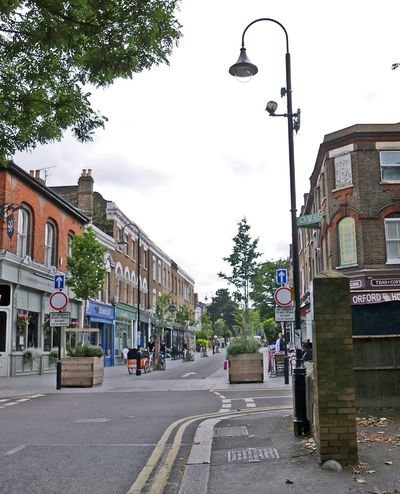 The design of the LTN has to ensure that traffic is not simply rechannelled from one residential road to another in the neighbourhood. If this is achieved, then some of the traffic is expected to evaporate. It is not like water in a pipe, which has find a way out - people make choices, and some of these choices - at least for the 40% of urban car journeys that are less than 2 miles - will be to walk or cycle instead of driving. And the more some people do this, the more others will too - it may be slow, but is cumulative.

An LTN benefits both pedestrians and cyclists, making the neighbourhood an altogether pleasanter and healthier place to live in. Shops also benefit from increased footfall, although shopowners often assume (as did those in Orford road) that the lack of motor traffic will be detrimental to their businesses.

Cycle lanes and LTNs make good combinations because research has shown that providing cycling infrastructure on its own will not be successful in persuading most people to take up cycling.[i]

LTNs make an area slightly less attractive to drivers and more attractive to cyclists, nudging the former towards alternative means of travel. Cycle routes could then consist of temporary cycle lanes on main roads, interspersed with temporary LTNs ('temporary' meaning up to 18 months) in residential neighbourhoods.

In the current emergency, more temporary measures may be used than ANPR cameras, such as planters and gates to block roads. It will, however, provide an unprecedented opportunity to try out new approaches to traffic management, and hopefully may lead to more permanent measures.

The plans being developed by the Council are not public as yet, though an article in the Ham&High indicates that they are creating east to west and north to south cycling routes, and that LTNs are lower on the agenda. Contrast this with the much more advanced programme in Lambeth, who are seeking to appoint an LTN Programme Lead who will co-ordinate the introduction of LTNs in different neighbourhoods.

Our MP has been talking to the CEO of Haringey Council about implementing an Emergency Transport Action Plan, asking for an unprecedented level of action on our streets without delay.

As our roads gradually fill up again, more commuters who would normally come into London by rail from beyond the north circular may also choose to drive – many coming through our neighbourhood – rather than run the gauntlet of public transport.

This through traffic does not just affect our own neighbourhood (here I am referring to the Palace Gates neighbourhood, which I am familiar with - Dukes Avenue, Alexandra Park Road N10 and Muswell Hill less so, but contributions from residents of this area would be very welcome!). Much of it is the same as that taking a short cut down Winton Avenue before crossing Durnsford into Crescent Rise and Crescent Road, then exiting from our neighbourhood over the Buckingham road railway bridge, it carries on to add to congestion on Hornsey Park Road, Wightman and the Ladder roads, and on into Islington and Hackney. Many of these neighbourhoods have their own campaign groups (often under the umbrella of Haringey Living Streets) to try and reduce rat-running and increase safety for cyclists and pedestrians. Should we start our own, and work with these other groups to pressure the Council to do more to restrict through traffic, making cycling a more viable option for local people, and our neighbourhoods healthier, safer and more attractive places to walk?

The introduction of 'Low Traffic Neighbourhoods' in some areas would thus benefit some other neighbourhoods nearer central London, while possibly causing problems in others. So it is essential that we work with other groups to suggest measures to the Council that will increase benefits and reduce negative impacts for all. We are not traffic experts, but residents are likely to be the most knowledgeable about local conditions in their neighbourhood.

Reducing the number of motor vehicles is of course a key climate issue, with transport now accounting for more emissions in the UK than the entire energy sector - a quarter of the total - and cars being the worst offender.

photos and video courtesy of Tom Pigott-Smith and Gudrun Parasie

Celebrating lack of traffic on Crescent Road during Lockdown: