*** STOP PRESS ***  Here's a very short informative film of the Haringey street event produced by realmedia, together with a (written) explanation of the thinking behind using roadblocks and other methods of nonviolent direct action by Extinction Rebellion. Thanks realmedia. The sun shone (thanks, global warming!) on the Crouch End street party last Sunday afternoon, when the local Extinction Rebellion (XR) group took over part of the green in front of Hornsey Town Hall for kids' activities, banner making and an impromptu People's Assembly. The latter focused in particular on air pollution in the neighbourhood (some radical suggestions were suggested by both adults and children). Meanwhile a continuous program of singers, speakers, poets and a band inspired by African music performed in front of the still-being-refurbished Midgey's restaurant (beside the green),

with cakes from the cak 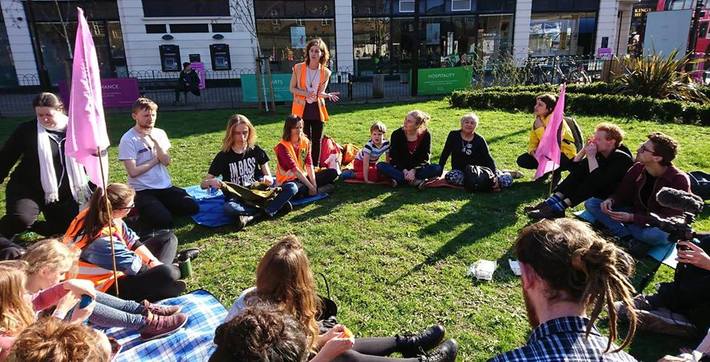 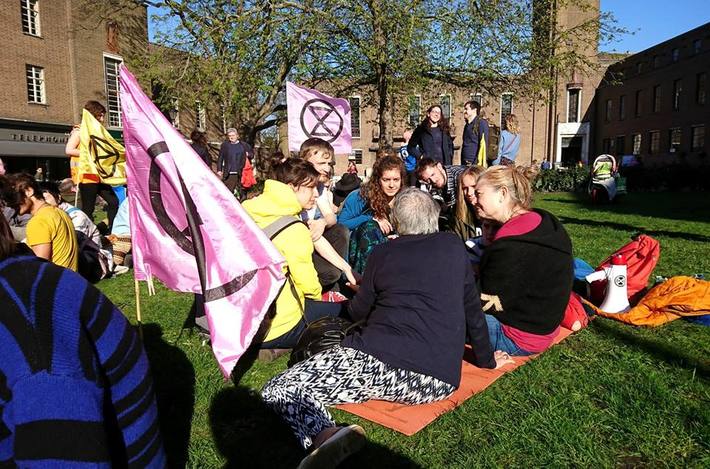 There were positive responses from many people on Crouch End Broadway, some of whom took part in discussions about the climate emergency, and over 100 signed up to receive more information about the local group and the demands and actions planned by Extinction Rebellion (which do not necessarily involve getting arrested!) – in particular, the International Rebellion taking place in the second half of April. Three very brief roadblocks were included in the afternoon's program. All in all, it was a very successful event.

The Rebellion will start with huge numbers of people descending on central London, with a view to bringing parts of it to a standstill with festive and artistic activities, among others. XR consider that such acts of non-violent civil disobedience are necessary to force the Government to address the fact that "Climate Breakdown and ecological collapse are a direct existential threat to us all"; to tell their citizens the truth about them; and to act to reduce our carbon emissions to zero within the 12 years that the recent IPCC report says is all we have before feedback effects will cause cascading climate breakdown. They demand that a citizens' assembly be convened to set out appropriate measures to tackle it (as has been done in Ireland, for example).

To find out more: