We have some interesting responses to our street survey, on a wide variety of topics (see this earlier post for info on why we ran the survey). A total of 179 people filled in the questionnaire, online or on paper - many more than the 100 or so that the Council consider adequate for a consultation, according to Tony Hopkins of the Palace Gates Residents Association. As well as publicising the survey on APN and the PGRA websites, we leafleted all residents in the triangle of roads shown below - apart from those blocks of flats which do not have mail boxes. If you did not know about the survey and would like to be involved, despair not, we will be having further meetings about it which you are welcome to attend. You can comment on it on this website, or email areastudy@alexandraparkneighbours2.org.uk .

A powerpoint presentation of the results was given by Kevin Stanfield, chair of the PGRA, at their AGM on 30 October. He did most of the questionnaire design, and analysed the results - thanks Kevin! (heading substanceqi at the top of the slides below is the name of his market research company). The slides can be seen in larger format in Kevin's PDF document. 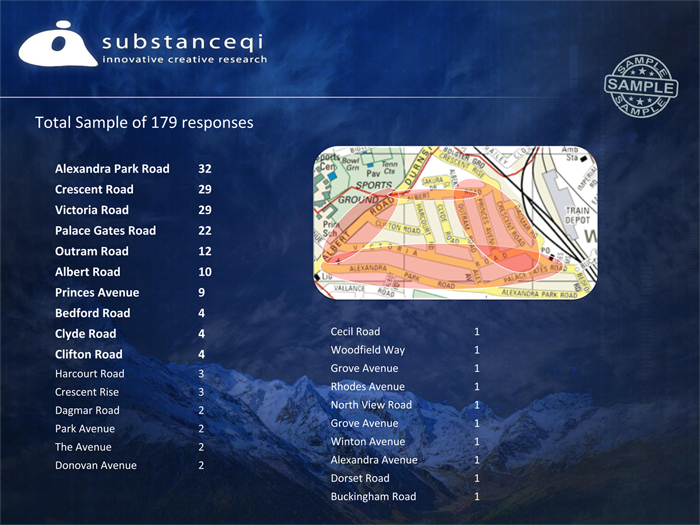 Here are the number of responses (i.e. questionnaires filled in) per road. Not surprisingly, the longest roads have the most responses, though the area around the Triangle is particularly well-represented (including Crescent Road, Outram and Princes Avenue), and also Albert Road.

12 of the respondents are not resident within the triangle of roads that is the focus of this study. 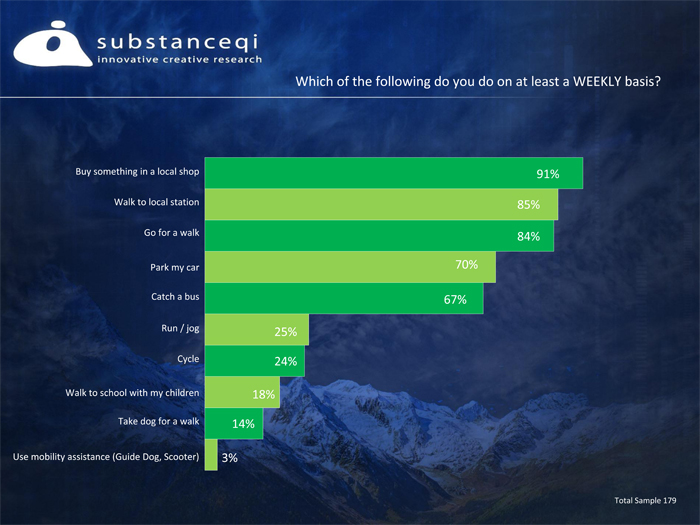 How do residents get around, and use the facilities in the neighbourhood?

Almost everyone uses local shops on a regular basis!

Transport: Fully 85% walk to a local station at least weekly, while two-thirds use buses. 70% have a car - slightly less than the national average of 73%, but much higher than the Haringey average of 46%. Only a quarter of respondents cycle regularly - perhaps only the brave, given the problems of London traffic and our hilly terrain.

Exercise - fully 84% of the sample 'go for a walk' at least weekly, while a quarter run/jog regularly. Smaller proportions 'walk to school with my children', or 'take dog for a walk'.

5 or 6 people use mobility assistance (e.g. a Guide Dog or mobility scooter), and street issues are clearly particularly important for them. Neighbourhood issues that respondents personally believe need to be addressed are topped by speeding traffic, about which 90% of residents are at least slightly concerned, with 65% strongly concerned. Almost equally important, however, is promoting the success of local shops (great that the positive aspects of the neighbourhood are emphasised, as well as the negative!).

Over half are strongly concerned about air quality, with nearly as many citing safety of children and volume of traffic.

Slightly less than half are strongly concerned about pedestrian safety and littering or fly tipping.

For all the issues specified above, 20% or fewer of respondents were not concerned at all. 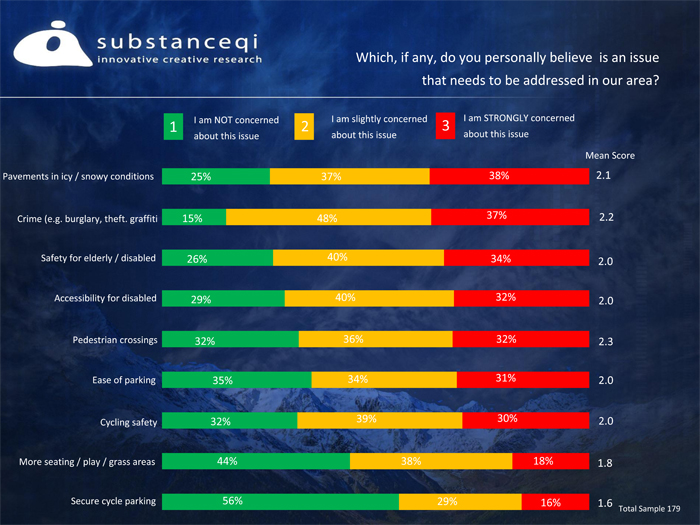 Respondents strongly concerned about Noise and vibration of traffic constitute 38% of the sample, with a similar proportion regarding pavements in icy/snowy conditions, and Crime.

Ease of parking is of strong concern to just under a third of the sample, but over a third are not concerned about this issue. Similar proportions regarding cycling safety. 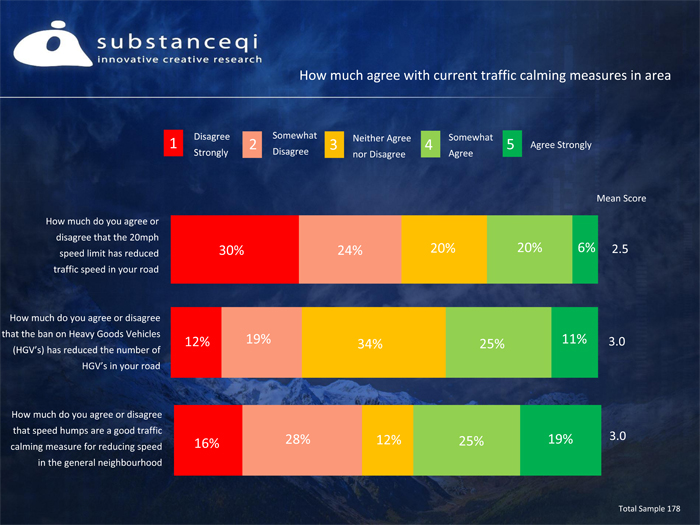 Respondents' opinons of the success of current traffic calming measures are varied. Just over half disagree that the 20mph speed limit has reduced traffic speed in their road, including 30% strongly disagreeing. A quarter think that it had made at least some difference.

Opinions are much more varied as regards the ban on HGVs, split roughly into a third each agreeing that it had reduced the number in their road, disagreeing, or with no opinion.

Opinions are just as varied but also more polarised with regard to speed humps. An equal proportion think that they are a good or bad way to calm traffic in the neighbourhood (44%), with only 12% having no opinion.

The variation in responses may relate in part to what road somebody lives on - I will check this out. 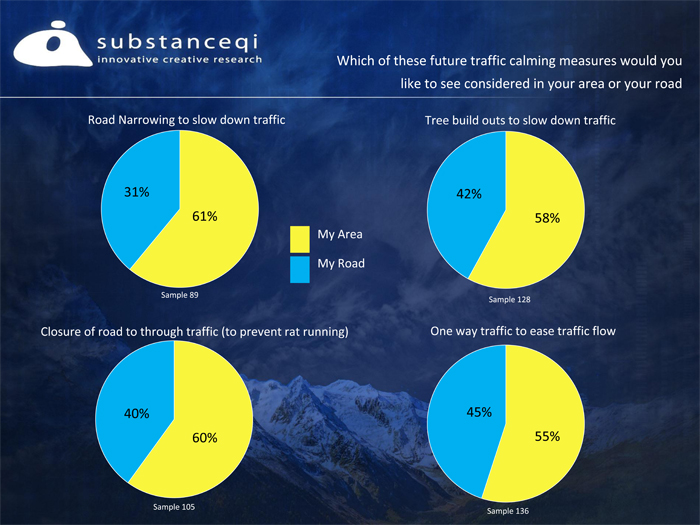 Respondents were asked what future traffic calming measures they would like to see considered in their area and/or in their road. They could choose any number of them, or none.

136 people (76% of the sample) like the idea of having One way traffic to ease traffic flow, with just under 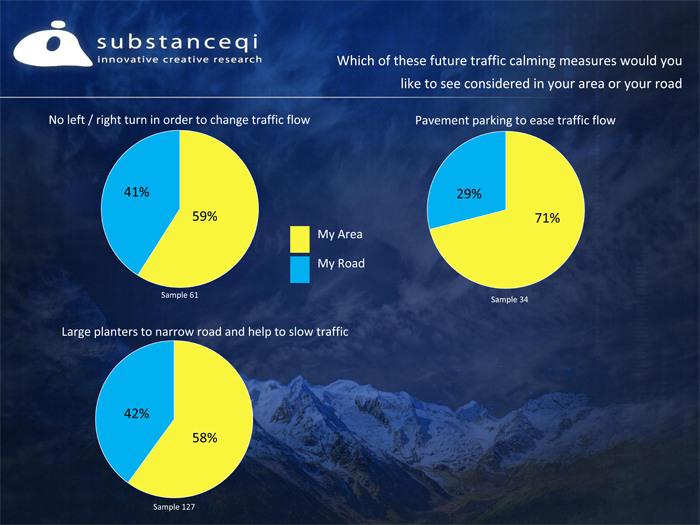 half of these wanting it in their road.

128 (72%) like the idea of having Tree build-outs to slow down traffic, with again just under half wanting this in their road. Much the same proportions favour Large planters to narrow road and help to slow traffic.

The next most popular measure is Closure of road to through traffic (to prevent rat running) - 105 people (59%) chose this, with 40% wanting it in their road.

89 people (50%) think that Road narrowing to slow down traffic is a good idea, but less than a third of these favour having it in their own road.

61 people (34%) think that No left or right turn in order to change traffic flow is a good idea, with 41% favouring having it in their own road.

34 people (19%) think that Pavement parking to ease traffic flow is a good idea, but not much more than a quarter want this in their own road.

Respondents were asked if they would like to see their road closed for a street party one day a year, and over three-quarters of them said they would!

An amazing 114 respondents (64% of the sample) made comments about issues that they would like to see addressed (and some about other things too, such as what a lovely neighbourhood it is to live in!). One issue mentioned in these comments that we clearly ought to have asked everyone about in the tick-box section is broken paving stones. See Kevin's PDF document for a quantitative summary of the comments, and I will discuss them in more detail in a later post.

Nearly a third of the sample said that they would like to be involved in taking this project forward, so we will be in touch with these people by email. If you would like to be added to the number, please let us know on areastudy@alexandraparkneighbours2.org.uk .