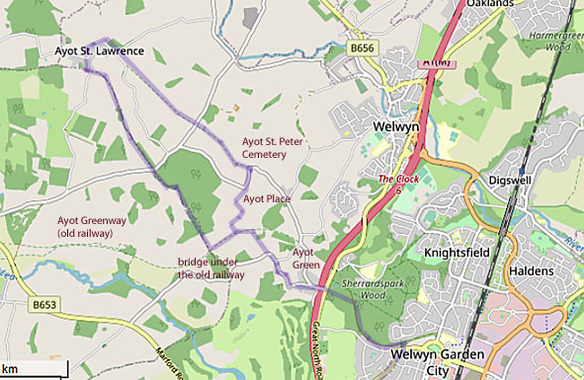 We went on a lovely walk in Hertfordshire last Friday, and thought others might be interested in it. It was a very easy trip on the train - almost empty - from Ally Pally station to Welwyn (it takes ½ hour, and they generally run every ½ hour weekdays and weekends – though check for cancellations). At this time of year there is so much vegetation that you would think you were in the countryside all the way.

Welwyn station is in the middle of the town, so we stopped for a cup of coffee before making off into Sherrardspark Wood (through the central rectangular gardens surrounded by shops, and onto Russellcroft Road, turning right into Handside Lane and crossing Bridge Road before entering a short footpath into the wood on the left).

The birdsong that greeted us in the wood was like a dawn chorus in Ally Park - our Birdnet app for identifying song, often so useful, was totally confused, and not helped by the background noise of the A1(M) on the other side of the wood! The route over the motorway (the old Great North Road) was via a small road which takes you immediately into the picturesque village of Ayot Green (first picture below). Once a Wesleyan centre (mostly artisans), it now looks like a wealthy neighbourhood.

Taking the lower footpath up to Ayot St. Lawrence (see map above), we went through quite a few wooded areas, where the bluebells were almost over. The pictured  hedgerow is next to the old railway (the Ayot Greenway), which can if need be protect you from the weather (of any sort), but on that warm, sunny May day we took the path on the other, sunny, side (the Hertfordshire 'greenways' are mostly quite shaded). Then turned right under the bridge which carried the old railway (see map above). Next to the photo of the bridge is one of the old railway, and then a view from it.

Walking on up the main footpath, we reached a short stretch of road leading to Ayot St. Lawrence, passing Shaw's Corner on the left. Once the home of Bernard Shaw, it now belongs to the National Trust, and has a lovely garden. The house has been left as it was when he last lived there. We didn't stop here since we had visited it before (on that trip we heard a cuckoo). We passed the old, ruined medieval church - it's not often you see a ruined medieval church in the UK, particularly one with a tomb monument with the remains of two reclining figures. And on to the Brocket Arms for lunch and a taste of Brocket ale (this area all used to be the Brocket estate). 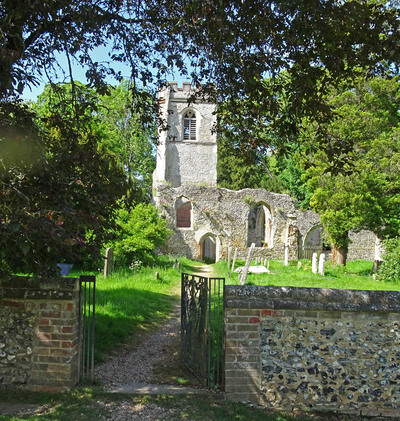 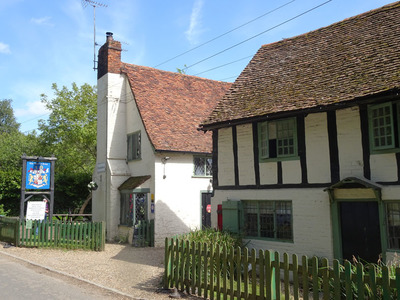 It took roughly 2-2½ hours to walk there, with stops along the way. The footpaths and bridlepaths are very well marked, but there are quite a few more than are shown on the Openstreetmap above, so it was helpful to have the OS Explorer map for St. Albans and Hatfield, which includes a mobile download.* There were occasional polite notices saying 'Sorry for any inconvenience ...', about 800 runners would be using this route for their annual 10k run on 22 May, Obviously a route well-used by walkers! 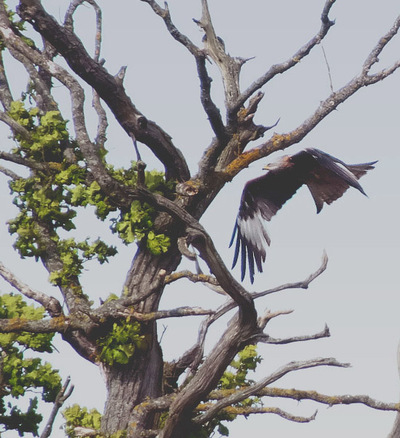 Returning to Welwyn, we took the upper footpath shown on the map above, mostly through open fields. The larks soared above huge fields of broad beans (no beans in the field shown in the picture!), which seem to be a speciality of farmers in Hertfordshire. I gather almost the entire UK crop is exported to the Middle East, where they of course make much use of fava beans. Most greengrocers here don't sell them fresh any more - I remember as a child taking them out of their lovely furry pods - though allotmenteers of course still grow them!

We saw some splendid red kites (or maybe several sightings of the same one), and a small bright yellow bird with a narrow beak perched on a fencepost. Maybe a yellow wagtail, as the book suggests, not long arrived here from Africa? There was no water near, so not a grey wagtail. We didn't see it wag its tail, mind you!

At Ayot St. Peter's cemetery (see map), we turned off the small road that we had joined, and into the Ayot Montfichet estate, through a very splendid gate. Well, not quite - the footpath sign directed us through the little door shown in the photo, and round the other side of the gate. The centre of this estate is an old 15thc house (Ayot Place - see map), now let out to various organisations, but we couldn't see it from the footpath, which curves round to the left of it.

We then retraced our steps through Ayot Green, since there is no other route nearby over the motorway, and back into Sherrardspark wood. The simplest route here is to go along the old railway, which carries on through the wood. Alternatively, there is a signpost in the middle of the wood (with some small sculptures) giving various alternatives.

In Welwyn, there was time for tea before getting the train back (only a few people on the train although it was rush hour - though we were going in the wrong direction for commuters from London).

* This OS map includes footpaths to the west of Hertford and Bayford too (on the other railway line from Ally Pally) - although both stations are themselves just off the map. It can be ordered online from the Ordnance Survey.