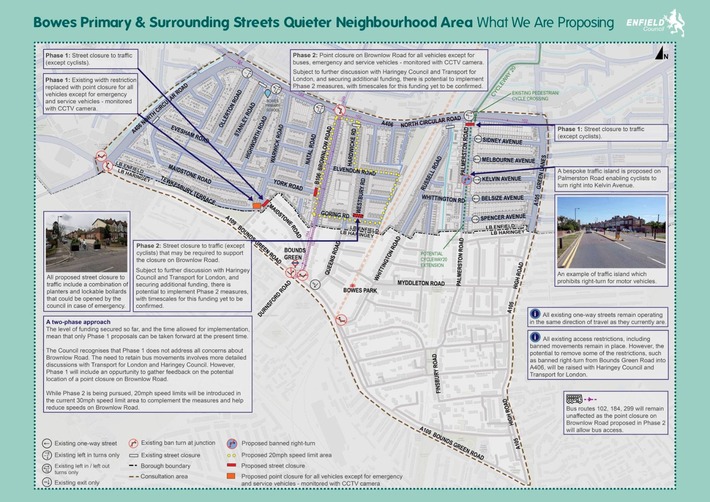 Residents in the Bowes Park neighbourhood – which straddles the Haringey and Enfield border – have long had to contend with major rat-running between the major roads that surround it – the North Circular on the west and north, and Green Lanes and Bounds Green Road on the east and south sides. Many of these residents will therefore welcome Enfield Council's proposal to create an emergency Low Traffic Neighbourhood (LTN) in their part of the area – even if some may disagree with particular elements in the scheme.

If the Enfield scheme gets implemented in some form – their bid for funding has been accepted by TfL – the roads in the Haringey part of Bowes, which also suffer from bad rat-running, will also need 'filtering' (probably planters or bollards), to stop traffic being displaced there. These roads are included in Enfield's consultation, and the creation of an emergency LTN in this area has already been recommended by Haringey Labour Climate Action Group.

What effect would these measures have on Alexandra ward? One tentative proposal for phase 2 of the scheme is to put a filter in Brownlow Road – allowing buses and emergency vehicles through, but not ordinary traffic – which would no doubt reduce the volume of traffic on our very busy Durnsford Road. I doubt that the measures would otherwise have much impact on roads this side of Bounds Green Road – what do others think?

Bounds Green Road itself has seen a 25% decrease in traffic over the last decade (calculated by Grant Gahagan from the DfT road traffic statistics database), probably related to the satnavs' habit of directing drivers down small roads. It has been said that