On Wednesday evening we had a very well-attended and lively meeting about the proposed abolition of Alexandra Ward, with detailed contributions from our councillors and members of APN about what it could mean for us, and possible alternatives which can put to the Local Government Boundary Commission who will make the final decision on the shapes of the wards in Haringey. (If anyone remembers any further points from the meeting, please add them as replies to this post, at the bottom.) We are extremely grateful to Father Tony Pybus, Vicar of Saint Andrew's, for his generosity in letting us use the hall, and all his help with the meeting.. 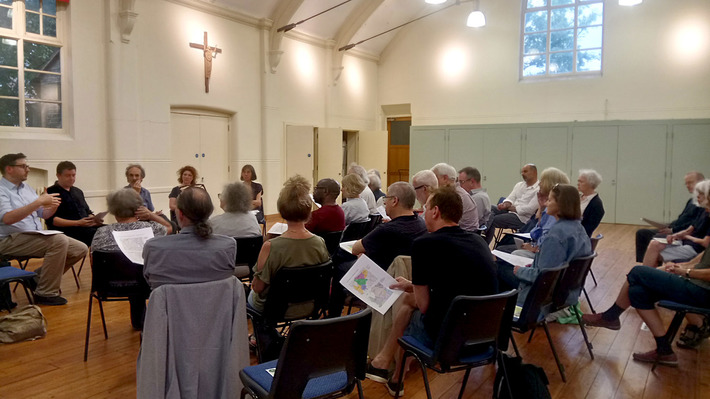 At Saint Andrew's Centre: thanks to Alessandra for the photo

The distribution of council seats throughout Haringey has to change because housing developments in the east of the Borough are increasing the population there so much that they must have more councillors there to keep the representation of residents across the borough reasonably fair. Wards in the west of the borough (west of the East Coast mainline) are less densely populated than the east, and the imbalance is increasing. The Boundary Commission has published a proposal for public comment which adds a new ward in Tottenham and changes many ward boundaries. It is based on keeping the number of wards at the current 19, and the number of councillors at 57, so one existing ward has to disappear completely by being absorbed into its neighbouring wards. The one to disappear is Alexandra, and most of the neighbours will also change shape and name.

Many people present were very unhappy about losing representation which was specifically concerned with this area, and being attached to the edges of areas whose main focus of interest and activity is somewhere else. This is partly to do with a sense of belonging somewhere they have lived for a long time, but a lot of practical isues were raised which made this concern very much more concrete. Contact with councillors was one important issue. The current area of Alexandra is quite compact and centres on the area around the library, not difficult to get to from most places in the ward. The alternatives are sprawling and divided (Bounds Green would be divided into 3 by railways), and so councillors attention to local issues is likely to be more divided amongst different issues and problems. Issues such as through traffic, parking, bus services, and schools (our two local schools will be right on the division between wards) have all involved the attention of councillors in trying to get council action where necessary and this is likely to be less straight forward. Neighbourhood policing, which is based on the wards, would have to change.

We discussed how we could make comments and proposals to the Boundary Commission, a scheme worked out be members of APN to retain an Alexandra ward, but with 2 councillors, was presented, and our councillors described the work the Liberal Democrats are currently doing to present an alternative scheme covering the whole borough. The Lib Dems are sticking to the current total of 19 wards with 3 councillors each, and there was discussion whether the Commission is likely to accept a proposal for having some wrds with only 2 (the APN scheme involves 3 wards - Muswell Hill, Alexandra and Woodside, being reduced to 2, with appropriate adjustments to the size of the electorate). It was pointed out that before a similar reorganisation in 1999, there were more wards, and several only had 2 councillors. There is no rule that specifies 3. Our councillors also said that if enough people ask for 2-counciller wards, the Commission would take note.

The details of both the schemes we discussed can be found here. (These can also be found from the new box at the top of our Home Page on this site).

To make an effective comment or proposal to the commission, it is not sufficient to simply express disagreement. They require a reasoned argument why something should or should not be done. The kinds of facts which can be used to back up an opinion are transport and access from one part of a proposed ward to the others, the existence of active community organisations in the area, use of the same facilities like shops, railway stations, schools, libraries. These are only some of the things which can count, but give an idea of the kind of comment the Commission is looking for. They say they get there facts mainly from schemes and comments presented to them, so they obviously don't do much of their own research on who we are or how we live - we need to tell them.

People also asked what proposal was most likely to be accepted by the Commission. The answer probably is: all submissions stating residents' views and backing them up with factual information are useful. It's the Commission's job to create a workable scheme from what they are told, and so long as your submission is reasonably argued, that is probably the best way to have an effect.

For details on how to respond, see the here mentioned above.
The offical portal for the Haringey consultation is at https://consultation.lgbce.org.uk/node/15479.

Responses need to be in by 5th August.