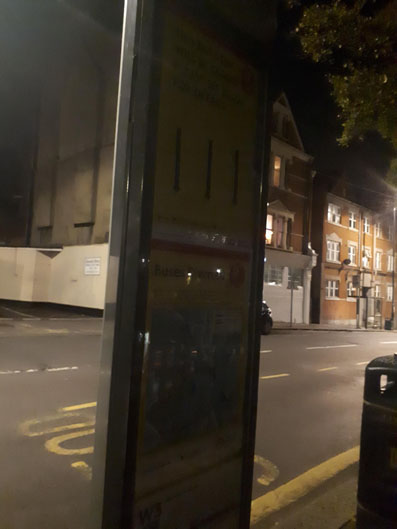 A small group of local people have been having some success asking TfL to improve the information they provide about diversions of the excellent W3 bus, particularly during large AP events such as the Fireworks and new Kaleidoscope Festivals (2 days each, and some nights when the W3 normally runs all night). Such diversions cause the W3 to be unusable in this neighbourhood (and there is no alternative form of public transport to Crouch End). The diversion route is always the same - from Wood Green station down the High Road, along Turnpike Lane and then Hornsey High Street, rejoining its usual route at Middle Lane, N8.

We were concerned that TfL persist in sticking notices about diversions on the posts of bus stops, which are

These days, most people waiting for a bus stand inside the shelter provided for them, so are less likely to go and peer at the bus stop itself for additional information to that provided by the posters inside the lighted shelter and, in some shelters, the Countdown digital display. There is also of course a digital display inside all buses, and here a paper notice could also be used (e.g. showing a map of the diversion route). Coundown in fact compounded the problem during the Fireworks festival by announcing the imminent arrival of non-existent W3s, causing huge build-ups of crowds by Wood Green station expecting to be taken to the Fireworks festival! Most people look to Countdown for authoritative information.

Our mailings benefited from being forwarded to some specific contacts at TfL by Cllr Alessandra Rossetti (also a local bus user). The Head of Local Communities responded by saying you are right – we should do better with our customer information for these events, and that TfL are  investigating better use of the Countdown system. This was just before the Fireworks Festival, and during the event they in fact used the message on Countdown that we had suggested:

In addition, Countdown gave the right information about what buses were due on the section of the route where the W3 was diverted - no W3s, and correct information about 184s, which were not on diversion. The latter was also a big improvement on last year, when Countdown  announced 'Bus stop closed' at  some of the stops, which was not only uninformative, but ignored the existence of the 184s. I guess the upgrade of the Countdown system that was promised to Chris Barker of the Sustainable Haringey Transport Group (and Campaign for Better Transport, London Group) in November 2017 must have taken place.

TfL also provided a useful map of the diversion route, as our TfL contact had promised, but it was stuck as usual to the bus stops themselves. As regards information inside bus shelters, she said simply that we do not usually display disruption information there. Yet they had a a huge poster in a bus shelter at the Palace advising people to step carefully when they get off the bus (we so much need to be told that ...), and more recently at the same stop there was a message from the mayor that tickets for the New Year fireworks were sold out, but 'London is Open!'. Could this space not be used for information that was relevant to the bus route(s) serving this stop?

The Countdown message was in principle excellent, but it appeared so infrequently that many passengers missed it. So we asked our TfL contact if it could run continuously, and also repeated our other suggestions. Backed up again by Alessandra (who also sent her the picture above), our contact told her that she had asked the Local Communities specialist for Haringey to get in touch ... She will be able to explore with you and members of the community what further improvements might be possible for future events. That was before Christmas.

Our sense of partial success got a setback around New Year. The diversion of the W3 on New Year's Eve was accompanied by not so much lack of information, as misinformation. The digital display inside all W3 buses announced that the W3 would be running all night on New Year's Eve (updated on the day to 'all night tonight'). Splendid. Except that not only was this not true in our neighbourhood, the bus would in fact be on diversion after 8.45pm when Alexandra Palace Way would be closed to traffic (there were fears of a repeat of last year's experience of drunken altercations between the crowd of revellers standing below the Palace to watch the fireworks over London, and cars trying to get through). This of course did not only affect people in our neighbourhood - the W3 crosses the borough from east to west, and there may have been Tottenham residents coming to view the fireworks over London who expected to get home again by the same route. btw does anyone know what information was provided during the diversion itself?

I do wish that TfL would think these things through more. I was pleased to hear a member of the London Assembly saying in a plenary session that TfL needs to give more serious consideration to the needs of bus users (he had been reading out a petition from some of his constituents regarding the no.19 bus).

But overall we seem to be getting somewhere, and will press forward with this initiative. Do join us! All comments and suggestions very welcome.