A few weeks ago, my last blog post (see below) dealt with the macro aspect of local history, looking at three maps of the Alexandra park neighbourhood through which we discovered much of its fascinating transformation.

We moved into our house on Harcourt Road about six years ago and curiously when we bought the place it was two flats (with a hallway with two internal doors). So, one extra question that I had was whether our property started off as a single dwelling or two flats?

To find out the answers I knew that I would need to look up various censuses and electoral roll registers and I made contact with Haringey libraries to see if they had these records. Eventually I found that they did, and they were kept at Bruce Castle Museum, Lordship Lane, London N17 8NU. 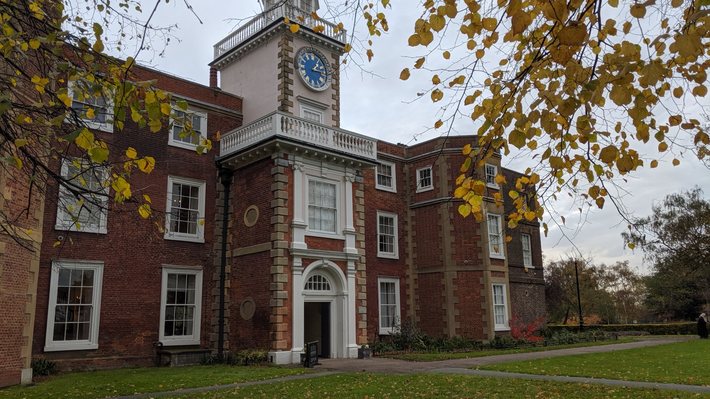 These documents are kept in the “search room” at Bruce Castle which is open on Wednesdays and alternate Saturdays between 1-5pm. And you need to make an appointment via this email

And one wet Saturday afternoon I headed off to Bruce Castle on my personal history hunt. Now here is the first challenge. Because Bruce Castle is close to Tottenham Hotspurs’ football stadium (White Hart Lane), parking around this area is severely restricted and only available to local residents. Thankfully there is a museum car park (round the back of the building) which is open to the public and I would recommend you use that or take a bus or cycle there.

Once I signed myself and met my friendly archives assistant, I was asked to put my rucksack in a locker and told that I was free to make notes (using a pencil only) but if I wanted a photocopy they were 50p each or I could take as many as many photos as I liked for £5. I chose the latter.

Luckily for me the search room was quiet, so I was able to quickly explain what I was after to the archives assistant. She asked me what year I thought my house was built in and I said that the year 1905 rang a bell and maybe we should start there.  She suggested we start with the Kelly’s Directories. These are the Victorian versions of today’s Yellow pages, with lists of businesses and tradespeople of a particular town or city but with postal addresses too. Because of this they are now considered an important source for historical research.

So, I started with 1905 and although there were already some houses and occupiers listed on my street, my house number was not present.

“Could I have the 1906 Kellys for my area please?” I asked. Again, my house number was not present.

It says, “Harcourt Road. South Side. Number X. Hardee Edward.” That is all. The Kellys only list the so called – head of the household – ie the man (sexist times I’m afraid).

But we now have the first occupier of our house a Mr Edward Hardee and the house number listed is not number Xa or Xb so my house did not start out as two flats. But what else can we find out about our Mr Hardee?

Bingo! Where I found details of the first occupier of our home.

At this point my helpful archives assistant suggested that the 1911 census might provide more answers. And she was absolutely right! But before I go on to what we found, let me give a short tour in the fascinating subject of the national census.

If anyone watches the long running and popular show Who Do You Think You Are? you will know that censuses are it’s bread and butter and a major tool in discovering family trees and local history. You could argue that the Domesday book of 1086, which was commissioned by William the Conqueror was the first UK census but as my archives assistant pointed out to me it was mostly concerned with recording the land rather than the people.

Interestingly a census is only performed on a year that ends with one ie 1911 with the next census being 1921. And there is an all important census day/night, because to allow for people travelling up and down the country, a census is a head count of everyone in the country on a given night.

A government clerk called an enumerator delivered a form to each household for them to complete. The heads of household were told to give details of everyone who slept in that dwelling on census night, which was always a Sunday. The forms were collected a few days later by the enumerator and the census produced.

It is said that some individualists worked very hard to avoid appearing on the census. It is rumoured that the artist J M W Turner rowed himself out to the middle of the Thames on census night in 1841 (6 June) to avoid helping the enumerator. And in the 1911 census some of the suffragette movement (fighting to give women the vote) boycotted giving their details to that year’s census.

The census day/night for 1911 was the 2nd of April, and for our own house on Harcourt Road, the 1911 census reveals that Mr Edward Hardee (name taken from the 1907 Kellys) was in fact Mr Edmund Hardie (he signed the census so that was his correct name). He was 36, his wife Ruth was 38. They had two sons Rudolph (10 years old) and Donald (1) with one daughter Evelyn (6). Mr and Mrs Hardie were originally from Lancashire (Manchester in Edmund’s case). And Edmund’s profession is listed as “Lithographic artist”. Lithography is a is a method of printing (usually art) from a stone or metal plate.

The 1911 census shows something else that is interesting. Edmund and Ruth Hardie and family had now moved from Harcourt Road to Warwick Road, New Southgate. This address is very close to Ranelagh pub in Bounds Green, so they moved to a new house a short distance away.

Instead the new inhabitants in our home on Harcourt Road were the Goswells. Husband Edward Goswell was 31 originally from Stoke Newington and is listed as a commercial traveller (salesperson) representing an iron galvanising company (galvanising stops iron rusting). His wife Annie Goswell was 27 and born in Islington. Their children were Doris (3), Edward (2) and Alfred (9 months) born in Highbury, Southgate and Wood Green respectively. Also listed as being at the same address were two others, a 38-year-old cousin whose occupation was listed as a despatch clerk and 19 year old Emily Nicholls who is listed as a domestic or servant and was born in Cheshunt. Assuming that Emily lived with the Goswells, my family and I have wondered about the location of the servant’s room in our house?

As you can see censuses give a fantastic amount of historical information. And a lot of the censuses are online and easily searchable through chargeable websites such as Ancestry.co.uk or Findmypast. Luckily Bruce Castle Museum archives have an account with one of them and for free (well the 50p cost of a printout) I was able to get a copy of the Hardie’s and the Goswell’s census reports.

A couple of interesting things about online census records. Often you see a lot of names blacked out with a line saying “This record is officially closed”. This can mean a few things. The main one being that that person is still alive, so their data or information cannot be released to the general public. Another one, which is slightly creepy and not politically correct, is that up until the 1911 the census questionnaires (called schedules) asked for infirmities to be listed in four categories – Deaf and dumb, Blind, Lunatic or Imbecile!

The next census was in 1921 but unfortunately censuses are only released after a 100 year have passed so I am going to have to wait for another two years for that one. And then it gets worse. The 1931 census was destroyed during World War II and the 1941 census was abandoned because of so much coming and going with troops during World War II.

So that leaves elector roll registers which have less detail and only list those who can vote (so no children listed).

In the 1932 Wood Green register of electors, our house is now inhabited by the Dooleys- Mr Herbert J Dooley and Harriet and Maria with presumably one of them being his wife. Later, using the online records, my resourceful archives assistant was able to find a reference to the same Mr Herbert Dooley who was now registered to Bournemouth, Hampshire where he is listed as a retired schoolmaster who had previously worked for the London County Council.

And then was more change. In the 1938-39 register of electors, the voters now living in our house were Mr Arthur Alfred Wells and Jane Catherine Wells. Again my super sleuth archives assistant looked at the online records and Mr Arthur Wells as a LNER Supervisor (LNER was a railway company) and Jane Catherine had the acronym U.D.D against her name meaning Unpaid Domestic Duties which we would now classify as a housewife.

In just two and a half hours’ time I had discovered a huge amount of information (with the enormous help of my fantastic archives assistant). But I knew that I wouldn’t have the time to compile a full list of the former occupants of our house. With about five minutes till I had to leave I picked a more recent year (1961) and asked to see the register of electors. It listed the name of a family who share the same surname as a company still operating the Alexandra Park area. When I mentioned this to my archives assistant I was told, “You can make a note of the details but would like you not to take a photo as there is a good chance that some of the family members might be around today.” Naturally I complied.

There you have it. A wonderful afternoon finding out all this history related to the former occupants of our house on Harcourt Road. I should mention that I am not a historian in anyway just an interested member of the public and really anybody should be able to do what I did. As I mentioned previously my archives assistant was brilliant and she was as interested in my personal history project as I was. The archives assistants are the gate keepers to this wonderful information. There is no need to be intimated by them but obviously be open to their advice and act in a humble, scholarly way for the best results.

Finally, a word about the Bruce Castle Museum.  Although I grew up in Wood Green and have lived in this area ever since, shamefully I have never visited Bruce Castle before. And there is so much to see there, as it’s overflowing with history. A grade 1 listed 16th century manor house, it served as a school run by Rowland Hill in the 1827 that was incredibly enlightened for its time with no capital punishment and the teaching of foreign languages, science and engineering. Charles Dickens visited the school and was very impressed by it. And computer pioneer Charles Babbage sent his sons to there. You can still see the old school kitchen and the big metal range where all the food was cooked.

It also has a beautiful red brick Tudor tower which was believed to be built specifically to house birds of prey. Well worth a visit.