This slim, larger format book is very well produced, like all Hornsey Historical Society's books, and well illustrated with maps, portraits of the bigwigs involved, and landscape paintings. There is a list of all those receiving land allocations at the end, with an indication of the locations of the plots. The advert in the right column of this website gives a link to the HHS webpage, with more details.

Although many of us don't live in quite the area covered by Hornsey Historical Society's new book, the historic parish of Hornsey, we are familiar enough with most of it, and it tells us quite a lot about the development of the district. The book gives a very detailed account of the terms and effects of the enclosure act requested from Parliament by the Hornsey Parish Vestry in 1813, to privatise the commons in the parish, and also the areas of 'waste' along the edges of roads and other public ways: any spaces not in the ownership of an individual or public body, but where some sort of right of ownership could be claimed by property owners or their tenants.

In those days what is now Alexandra Ward was in the parish of Tottenham. A quick glance at the catalogue of the Metropolitan Archives suggests that Tottenham never had a general enclosure act, since the parish vestry went on authorising individual claims for enclosures through most of the nineteenth century.

An enclosure act involved a survey of the commons and of the property of people who claimed to have rights to its use. Not everyone did, and the rights were usually attached to a piece of local land, or a tenancy. David Frith starts the book with something of a mystery: why did they bother with this act? The amount of common and waste land in the parish was very small by comparison with most places which imposed comprehensive enclosures. Creating a Private Bill wasn't a free service and in this case it was much more expensive than most, which reduced the profit to the recipients of enclosed land, since costs were covered by sales of some of the land rather than simply giving it away. In the Hornsey case, the local survey covered not just the property of those with a claim to the land being enclosed, but all property holders in the parish. This made it more expensive to do, but also gives an excellent record of the state of property ownership throughout the parish at that time in the large map that was made by the surveyors. It's scale is 26 inches to 1 mile, making it 11 feet (nearly 3.5m) long. 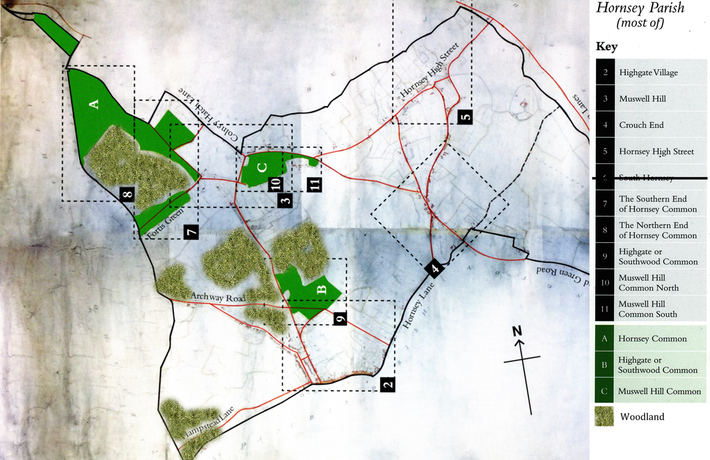 The areas of common and woodland in Hornsey parish, 1813

(adapted from 'The Hornsey Enclosure Act')

The book includes some picturesque colour extracts from the original map showing the main built areas in Hornsey High Street, Crouch End, Muswell Hill and Highgate. The amount of building at the time was small, but the map shows what contemporary paintings don't, which is how many small plots of land were owned by individuals even in the absence of a house nearby. All sorts of small pieces of land were also distributed by the enclosure act, especially along roadsides where the land was not yet private, making the patchwork of ownership even more intricate.

The commissioners who implemented the act also defined some new roads, such as Saint James's Lane, whose main purpose seems to have been to give access to out-of-the way plots created by the enclosure. The main roads were either already there, or being built at the time - like the Archway Road: one map shows a considerable area of land belonging to the Archway Road Company just north of the Archway bridge, presumably acquired for something other than road building.

While most of the roadside land was enclosed by the act and given to nearby properties - the right to graze cattle on the roadside was abolished by this - the act specifically forbids enclosing of the roadside land along Hornsey High Street and Priory Road, which is why they remain as wide as they are. This was done "at the request of several respectable inhabitants ...conceiving that, if those pieces of waste were enclosed, the beauty of the village would be entirely destroyed".

David Frith asks what interests were really served by the enclosure act. The parish contained two manors: Hornsey Manor and Brownswood Manor. The lords of these manors were both senior clergymen: the Bishop of London (Hornsey), and an official of Saint Paul's Cathedral (Brownswood), but the land was mainly leased to tenants, the largest of which was Lord Mansfield of Kenwood, whose leases included Coldfall Wood, Dirthouse (Cherry Tree) Wood, Brewhouse/Gravel Pit (Highgate) Wood, and Churchyard Bottom (Queen's) Wood. The enclosed land was allotted according to the size of a landowner's or tenant's existing holding, so those with most got most (on the grounds that they would have been making greater use of the commons). The weight of wealth was also felt in the passage of the act. Approval or objection to its terms was measured not by the number of people who supported or opposed them, but by the total value of the property each side represented. In the end £181 12s 10d objected, £923 16s 7d approved. There were £85 16s 10d worth of abstentions.

Large landholders might benefit from increased rentals, or increased agricultural production (most people in the parish still worked in agriculture, and the main crop was fodder for the horses which provided London's transport). But the many small parcels of land handed out would not be very efficient in these terms, and one would guess smaller owners would have had a fairly large say in the workings of the parish vestry. Housing development was not at that time really on the horizon, arriving only 30 or so years later. The author thinks the most likely explanation is the property interests of the Church, who wanted to get their holdings tidied up in preparation for the expected loss of income from tithes (the local tax which supported the Anglican churches and their clergy) which had become extremely contentious by this time. They were abolished 20 years later, but the issue was already live.

There are two questions it would be nice to have much more on. One is the composition of the Hornsey Vestry committee at this time - and who might have had influence on it. The other is what the state of the land market was at this time, whether for housing development or anything else. There was a massive European war on in 1813, and parts of the economy were booming. Asa Briggs says "Landlords benefitted from high rents and tenant farmers from wartime prices." It would be interesting to know whether this prosperity was encouraging speculation by those who had the resources - those who did not were hit by high prices and increased duties on everyday goods which paid the costs of the war.

The enclosure act did not completely neglect the poor: land was put aside for use by the poor law guardians for relief benefits (some even for cottages which did not get built), but exchanging the ability to gather free fuel on the common, or graze an animal, for hand-outs administered through poor relief would only increase poor people's dependency and bring them under greater control. All David Frith's judgements in the book are very measured and cautious, but he concludes with a nod towards (he says) "E.P.Thompson's obloquy, 'Enclosure (when all the sophistications are allowed for) was a plain enough case of class robbery...'." I expect there are many more insights and issues that will be suggested by this interesting piece of research for those with local knowledge.

For a wider background of the history of enclosure, try this article - interesting and amusing (and not unbiased).